Private detective Rex Kane is growing tired of the modern PI racket. A fan of 40’s noir, he longs for a time where “real” detective work was required. After a mysterious visit from a woman straight out of his favorite movies, Rex finds himself traveling between 2016 and 1947 to solve a murder. A corrupt cop and his innocent sidekick, a complex relationship with the mob, and betrayal by the victim herself, lead Rex to test his own morals and find the past may suit him better than he hoped.” 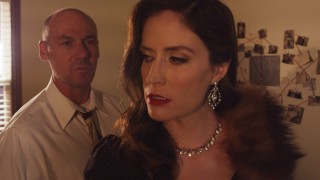